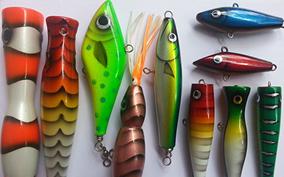 Now I'm not saying that mass produced, commercial fishing lures don't work. Not for a minute. What I am saying is that custom fishing lures work much better. And if you want to be at the top of your game as a competition fisherman, or even if you just want to out-fish your buddies that's all important.

So, why do custom fishing lures outfish mass produced ones?

Perhaps the best evidence comes from the web pages of the International Game Fish Association:

"Research indicates that the largemouth bass is also the most intelligent freshwater fish, able to distinguish and avoid a particular type of lure after only one encounter with it. In fact, some bass lakes believed to be "fished out" contain plenty of bass but the fish have learned to recognize virtually all the lures in common use on the lake. In such cases, a lure that is new to them will often work where others have failed."

It's the last line that's important here "....a lure that is new to them will often work where others have failed ". Ah-huh!

Custom lures are made in much smaller numbers, so the fish don't see them as much and they stay effective, year after year after year. This is why the top tournament anglers are in cahoots with fishing tackle manufacturers to keep designing and making new lures. If they use the same lures every year the fish become used to seeing them and their catch rates suffer. They have no choice, they have to keep coming up with new and better lures to stay in the competition.

What does this mean for the average fisherman? Does it mean that the only way we can compete is to spend loads of money of expensive custom lures? Well, that's one way to stay competitive, I suppose. But I have a better one!

Have you ever stopped to think about how easy it is to make your own wooden fishing lures? I started doing it as a schoolboy, without instructions, tinkering in my fathers workshop until I created something that would work. In those days my wooden lures weren't as pretty as the ones in the tackle shop, but they were every bit as effective, and more so.

And contrary to what you might think, you don't need many tools or any special equipment, most people already own everything they need to get started. Sometimes I'll make 8 to 10 lures in an evening while I'm watching my favourite fishing show on the TV, it's that quick and easy.

Give it a thought. Are you wasting time dragging popular lures past fish that you really should be catching?

The Basics of Fishing Equipment - Know Your Tackle

When talking about things such as reels, hooks, lures and all of the other fishing terminology associated with the hobby of fishing, enthusiasts naturally refer to them under the umbrella tag of 'Tackle'. It's a phrase that most people outside of the sport will be familiar with too. The term 'Tackle' originates from the phrase 'Takel', which originally referred to the rigging of a sailing ship, i.e. the ropes that are essential for a ship's sails and mast. Over the years it became synonymous with fishing equipment, and the term stuck.

Basic fishing tackle consists of a rod, line, hook, bait, lure, and sinker, all of which are specially designed to be as easy to use and accurate as possible. For example, the line is made up of a cord specially manufactured to be very hard to detect underwater while being very strong. Factors to take into account when buying a new line include issues such as resistance, the stretch, its strength and suchlike. The line should be chosen after considering the size and species of the fish that is to be caught.

The sinker, otherwise known as a plummet, is a weight that aids in getting the bait and hook as far out into the water as possible from wither the shore or a boat. Hooks are available in a wide variety of sizes, shapes and materials to suit each person's individual fishing style.

Baits and lures are the other essential elements of any fishing tackle arsenal. The lure is an object that looks and moves like the prey of whatever fish you're aiming to catch. Once the lure has done its thing, the fish will turn its attention to the bait, which is the prey element the fish will go for. The lure and bait work in tandem to ensure you get a good catch. The bait can be natural, such as maggots or insects, or man-made materials. As with everything else in fishing, a successful catch is down to having the best fishing tackle at your disposal.

Pike are considered large freshwater game fish that are highly prized by fishermen. They are widely distributed in the northern part of North America and Europe, some pike have been recorded to weigh over 60 pounds. Pike are ferocious predators that will prey on smaller fish including young pike, frogs, small water fowls and muskrats. During spring and summer, larger pike prefer to be near in shallow water and in areas with thick vegetation such as weed lines and estuaries.

Traditionally the best pike lures that anglers most often used are the yellow five of diamonds Daredevil and the red and white Daredevil spoons. Use red in color when fishing in clear water and the yellow when water visibility is poor. Williams weedless spoons, crankbaits, spinnerbaits and bucktails are also very effective lures and work well when trolling. When casting a Daredevil, try casting high and right before the touches hits the water, pull back on the pole so the lure smacks the surface. This seems to trigger a better response from bigger pike. Pike are known for going after surface lures which makes topwater lures such as the Rippin minnow and Rattlin dog excellent lures as well.

My go to fishing tackle for pike is a 8 foot medium heavy action baitcasting rod. I also use a medium size baitcasting reel with 20 to 30 lb test and 40 lb wire leader. One popular trend that I have observed recently is fishing for pike using #8 to #10 weight fly rods. Large dry flies such as streamers and grizzly saddle hackles in black, white and chartreuse are deadly for pike. Pike fishing with a fly rod requires finesse and skills which makes it very exciting.

When fishing for pike, always keep in mind that pike are aggressive hunters. They have razor sharp teeth and should be handled with care. Use gloves and pliers when unhooking lures. Fishing for pike in the late summer and early autumn will provide the best chance at catching a very large pike. This is the period when the pike eat the most to take advantage of their growth spurt right after spawning. They are also at their strongest during this period, making the fight to get them in the net even more exciting. Good luck!


We provide ESCA LURES offering quality items at prices far cheaper than the high street. Every item is carefully packaged using the latest technology to ensure safe shipment to you. Enjoy your visit!