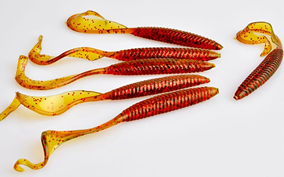 The first way to fish soft plastic lures is the method that is called darting. What you will do is attach the lure to your hook in a Texas Rig manner, so that the tip of the hook is buried in the lure, thus making it weed-less. Next, cast your bait into the water and allow it to sink down to where you would like it. Retrieve the lure by jerking the pole towards yourself, then reeling in the slack. This causes the lure to imitate an injured baitfish.

The other way to fish these lures is in a rise and fall manner. To do this, take your favorite soft plastic bait and hook it any way you desire. If you will be fishing very deep, it is not a bad idea at all to add some lead split shot above the hook. Bring the fishing lure back in by reeling it up, then letting it slowly drift down back to bottom. Be aware because a fish could strike it at any time.

When I first began fishing for Striped Bass one of the annual rituals we had was greeting the first arrivals of the spring run at our favorite early season spot. We would start making the effort sometime late in March during the milder years and by mid-April if winter had been slow to give in. In either case those early season outings were never very warm, with the water temperature usually hovering just below fifty degrees and the most favorable condition for catching fish being a southwest breeze over it. Some days it was like ice fishing minus the ice.

Our method consisted of casting lead-head jigs, often tipped with grub tails. We used small stuff, mostly less than one-half ounce, and would often tie in a teaser fly up higher on the leader that was not much more than three or four hairs tied on a hook. Some guys liked to use single tail twisty grubs, some preferred the double tails, and some of us were using the smallest rubber shad bodies we could find.

Then something came along that revolutionized salt-water fishing. Around 1999 or 2000 Storm Lures started making very realistic swim-shad lures with a keel-weighted salt-water hook molded right into them. The lures were available in a variety of sizes and colors and their action was incredible. Most of us put away our lead-head jig molds and were total converts in no time.

It wasn't long before other manufacturers started targeting the market and at this point there are endless variations on these lures. Tsunami, Berkley, Offshore Angler and D.O.A. are just a few of the others offering rigged soft plastics to fit almost every facet of salt-water fishing.

We're not just using these types of lures for early spring schoolies but throughout the season. The swim-shads are now available to match all different sorts of baitfish patterns from the smallest silverside to the largest bunker - Storm Lures offers a swim-shad in it's Wild Eye line that is nine inches and rigged with double hooks. They have also started offering rigged eel imitations in ten-and-a-half and thirteen-and-a-half inch lengths.

You will also find these rigged soft plastics to imitate the prey of many of your other favorite salt-water game fish. Shrimp, crab and lobster patterns are all available, as are a number of patterns designed for targeting southern species like redfish and snook.

All of the lures I've mentioned so far are available rigged. If you don't mind rigging your own the possibilities only expand further. There are literally soft plastic imitations of every kind of bait in every different size you can think of available today.

Additionally, many lure manufacturers are starting to offer hybrid lures - a combination of the realistic appearance of soft plastics and the realistic swimming characteristics of a conventional stick-bait.

If you're a hold out and haven't really given any of these "new generation" lures a fair try there couldn't be a better time. You'll find an array of soft plastic lures to compliment your fishing arsenal no matter what type of fishing you do.

When it comes to the most successful of freshwater lures, soft plastic worms would have to win hands down.

Out of all the types of freshwater baits and lures that are out there, there yet has been a freshwater bait that has come close to the overall success of the humble worm.

Though the question many freshwater fishermen both young and old often ask is what soft plastic worm is a clear winner when fishing for largemouth bass and other highly sought after freshwater species.

Of course to keep things in true perspective it's worth pointing out that there are some worms that clearly work better in specific areas and conditions and it's always best to experiment to see what works for you in your area and specific situation.

Although the question remains as to whether there is one plastic worm which clearly outperforms all other freshwater lures when it comes to largemouth bass fishing.

So I set about asking this very question from my fellow anglers wherever I could find them and after countless hours on the internet surfing freshwater fishing forums, at my favourite fishing ponds talking to the locals and over many beers with friends I was able to put together a definitive list of some of the best soft plastic worms available on the market today.

So what makes a great soft plastic worm?

Well versatility is paramount, with a worm you really want to attract strikes in a wide variety of situations and conditions which is why the Senko Worm wins in all our testing, hands down!

Its the one worm you can be confident knowing if you're not getting any bites using it, either the fish aren't there to be caught or they're too busy watching Oprah and they will look for a meal when their good and bloody ready!

The Zoom Finesse worm is a great worm in its own right, but just lacked the overall versatility of the Senko. In our opinion the Zoom is a more specialised worm typically suited to colder water or when largemouth are a bit finicky or have bedded down.

'The perfect worm for Largemouth who are busy watching Oprah!'

The Gene Larew Sinking Slugger is our dark horse favourite and lesser known soft plastic worm, once again this is a more specialised worm best used for fishing deep water although you can still expect to get a healthy number of strikes on the 'fall' with this worm.

So there you have it, my definitive list of the best soft plastic worms on the market.

Though best not to take my word for it, much better to get out there and test some of them out for yourself!


We provide ESCA LURES offering quality items at prices far cheaper than the high street. Every item is carefully packaged using the latest technology to ensure safe shipment to you. Enjoy your visit!