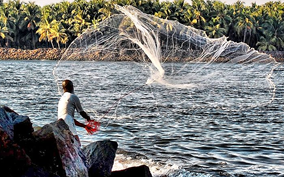 The art of fishing depends on experience and tools. Back when sophisticated lines and nets weren't invented, fishers used their bare hands to catch clams, lobsters and crabs. The technique is still practiced today but is superseded by more advanced methods and the use of efficient tools. Let's take a look at what these are.

Hand gathering: One of the oldest techniques, humans used it to primarily catch shellfish like those mentioned earlier. Serving to act as a means of livelihood, hand gathering is also a sport in some regions. What makes it a highly skilled method is that little or no tools are used and fishers are expected to rely on sight.

The technique is also used to gather catfish, sea urchins and sea cucumbers which are delicacies in the Far East.

Angling: Angling is a popular method that consists of using a hook attached to a fishing line with or without the use of a weighted end called a sinker. It's become the most popular technique in sport fishing although commercial fishers employ it by adding tweaks. These 'boosts' include trolling - drawing several lines baited with lures through water - and longline fishing - branch lines connected to a main line with baited hooks attached.

The hooks used in angling have raised concerns among animal rights groups that state they inflict pain and cause damage to the sensitive bodies of fish. Certain countries have banned the practice.

Netting: Netting relies on nets to catch fish, discarding the use of hooks. Not used in recreational fishing, it's a popular technique among commercial fishers. The nets themselves can take on different forms such as cast nets which have weighted edges, gillnets which prevent fish from escaping by snagging on their gill covers, and trawl nets, huge nets pulled by trawlers.

Spearfishing: Using spearguns, this technique has its share of advocates and opponents. In some regions, it's been blamed for assisting in the extinction of local species. However, in others, it's viewed as an environmentally friendly method because it doesn't cause habitat damage, has no by-catch and doesn't create pollution.

Dredging and bottom trawling: Also used in commercial fishing, dredging uses a fishing boat that drags a dredge along the bottom of the sea to collect shellfish, sea cucumber and sea urchins. It's similar to trawling except for the dredge where trawling substitutes it with a fishing net.

Though efficient, bottom trawling is considered a destructive method because it damages seabed communities, results in unwanted by-catch, and disrupts seamount ecosystems. Several countries have implemented strict regulations on trawling with the Republic of Palau completely banning the practice and prohibiting Palauans and Palauan companies from doing so not just within in its jurisdiction but in other parts of the world.

Electrofishing: Usually practiced by scientists to conduct research, electrofishing can also be used to fish for consumption. It relies on electricity to stun fish for seconds or a couple of minutes, giving the fisher an opportunity to catch fish. Although it seems destructive, when done correctly, the technique is safe and should result in no harm to the fish if the purpose is to catch and release.

Fishing remains an important activity and has a huge bearing on providing direct and indirect employment to millions of people around the world. There's close to 40 million fishers on the planet, proof that this ancient activity continues to benefit mankind.

Fishing lures are less messy than bait and they provide many benefits. They are designed to resemble and move like the prey of a fish. For more details visit this website.