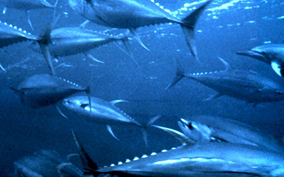 Anytime we get to catch a fish as large or larger than we are, we have an experience not ever forgotten. Catching a large Yellowfin Tuna is an insane amount of work. Even a small tuna fight like a fish twice it's size. A Yellowfin weighing 100 lbs fight as hard as a 300 lb marlin. The difference is normally the marlin will fight on the surface and the Yellowfin will sound straight down when they're hooked.

The lures used to catch the big tuna can be very different. I'm sure the fisherman out there who fish for Yellowfin have a supply of their favorite tuna lures. We used to hit the big Yellowfin on our marlin and wahoo lures. These lures are about 4 to 5 inches before skirted. I image the color of the skirting might depend on where you are fishing. Where I fished, blue and pink were great colors. I liked the action lures the most. These are lures that move in different directions as you are trolling it along. Always ran at least one big Konahead on the outside. It acts as a teaser to draw fish in and the really nice big fish loved to bite it. I've even had bonita hit it, and the lure was as big as he was. Another great lure for big Yellowfin is the jet head. Jet head lures come in a large variety of size, weight and head features. Some will leave a trail of bubbles because of the holes near the tip. I found jet head lures really worked great running low on a wire line. Once again I would skirt these with at least some pink. Pink, for us, was a very good tuna color.

Since the Yellowfin have very big eyes they hunt well into the evening. They hit lures gliding through the water when there is nearly no light in the sky and the stars are out. They also will hit at the very crack of dawn. These a good times to troll for tuna but my friends and I have run into schools that are biting in the middle of a hot day.

When the big tuna hit you just can't believe your reel can spin so fast. The pole is bent to almost 180 degrees. If you have a harness and are in a fighting chair it will feel like you are hooked to the bottom. Every foot reeled in is hard work. The fish will swim in large circles below the boat resisting with all its strength at all times. When he first sees the boat he'll take off on another hard run down, down, down. Be prepared to put up some time for this.

Once you've fought him to the boat you will have to gaff it. This can be dangerous. Many people have jabbed the gaff in the fish and got pulled into the water. Also, it takes a pretty strong guy to lift over 100 lbs. over the side rail using only the gaff. If you have a flying gaff (a gaff that separates from the pole with a line attached) it can be very useful. The hope is that the fish is now so tired he can't stop you from grabbing his tail fin and together with the gaff and a crewman haul him in. It always amazed me how grown men turned back into little boys when a really big fish is landed.

Be sure you remove the gaff carefully and stow it in a safe place. Please visit me at http://www.adventure-ocean.com/blog.html

I am Christopher Bassler and I spent 40 years living on Guam. Guam is a part of the Marianas Islands. I am a Dive Master and had my 100 ton captain's license for 20 years. I was the Chairman of the Dive Safety Control Board at the University of Guam for several years. My field is water safety. Please visit my site http://www.adventure-ocean.com and help me spread the word and save lives through education.