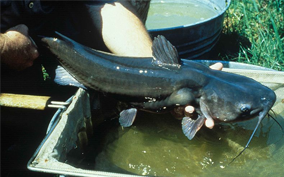 April is a month of activities. The Robins begin to show and the songbirds begin to sing signaling the coming of spring and the end of winter. For the hunter it means strutting gobblers. For the angler it means warming waters and the beginning of a great season of great fun and fresh fillets.

Most anglers I know begin to prepare their crappie poles and sharpen their jig heads for some deep brush jigging or spider rigging some tuffies along some creek channels leading to known spawning grounds or sunken stake beds. This is a great time for some cruising crappies but it can be just as good for channel cats as old man winter loses ground.

This time of year can be deceiving as the air temperature rises the catfish angler can't wait to get on the water. The problem is that the water takes a while to warm even with bright sunny days and warmer weather. The important thing with early spring cat fishing is water temp. Finding the warmer water on any lake will be the focus and just a few degrees can make all the difference.

Look for temp changes in shallow coves. The larger the area of shallow water the quicker it will warm providing great catfish action. Water 1 to 4 feet is a great place to look as the springtime sun is drawn to the dark bottom of the lake causing the water to warm quicker in these areas. I know it is tempting to fish deep when the water temps are so low but catfish do feed in these shallow areas as the water begins to warm. The warmer water definitely stimulates the cold blooded cats causing them to prowl but an even stronger motivator is the food found in these shallow coves in the spring.

In the winter there is a natural die off of fish that occurs and if your lake has shad, which most successful catfish lakes do. Then the amount of food floating below the surface of the lake can be extraordinary. This die off provides catfish with a much needed food source to begin the spawn that is nearing with the warming of water. Instinct will prevail and the catfish know that these wind swept coves have trapped lots of dead fish from the winterkill and they do take advantage of the natural occurrence.

Wind to an angler can be a nuisance or a great ally. In the case of early spring cat fishing wind is your ally. Not only does wind help mix the water and help to warm these shallow coves but it also tends to push these dead fish into these coves. The important thing is to find the combination of large shallow cove and a wind that blows directly into this cove. If the wind is not blowing directly into the cove then try to at least locate a side wind and fish the bank being lapped with the wind blown water.

The choice of bait seems obvious. Cut shad is the way to go for this time of year and does work but I tend to mix it up a little. Most of the fish will focus on dead shad so you definitely want a rig with cut shad but I usually rig a pole or two with something different just in case it stimulates a fish that might be attracted to something a little different. I have to say that sometimes the different bait far outperforms the shad but always have cut shad in the boat, as it will work best most of the time. Some other bait I use is fresh chicken livers and where legal fresh bluegill fillets work great.

First scale the bluegill then fillet. The scales, I feel, trap the smell of the meat and needs to be removed. Some will argue that the smellier the bait the better for channel cats. I can only say that fresh bait has always worked well for me and seems to attract the larger fish as well. I may be wrong but I keep the stinky stuff out of my boat and stick to fresh or fresh frozen. I have caught fish on the rotten stuff but I seemed to waste a lot of time with fishless strikes and smaller fish. Since going strictly fresh the bite action has slowed but the hook-up action on bigger fish has increased as I waste little time worrying with fishless bites and more time fighting nice size channels to the boat. Usually thirty minutes in one spot is all I will wait before searching another cove. Keep moving but do not forget that first cove later in the day as the fish may move up while you search other parts of the lake.

Tackle for Channel Cats is simple but a couple of tricks can really help your success. You want to start with at least a medium or medium heavy rod. I use a heavy rod and the reason is since targeting these larger Channel Cats I have landed several over ten pounds. These big channels can put up a great fight and are many times in the middle of some snarled brush not to mention the twirling these fish do as they near the boat which can put plenty of strain on your gear. If you are like me you will start with your regular gear that you have used for years for those one to three pound fish but after hooking into and losing some of those giant channels that prowl the shallows early in the season you might decide, just as I did, that quality and sturdy gear is important to catching big Channels. Also there are giant Flathead monsters that tend to reside in the same type areas as big Channels and the last thing you want is to tangle with a forty-pound flatty in a brushpile with wimpy gear.

Another well-known trick is the slip sinker. These fish are very sensitive to pressure and if they feel any at all they will drop the bait. I have yet decided whether a free spool is better than tight lining. All my rigs free spool just in case I miss a bite he can keep running until I can get to the rod. If I see the bite I set the hook immediately. I tend not to tight line because I have seen too many dropped bites when they feel the rod without a hook set the hook, I believe, will slip right out when the fish spits the bait covered hook out of its mouth. So experiment and draw your own conclusion. Another lesson I have learned is that bait covered hook. I used to cover the hook with bait for fear the fish might feel the hook and spook. I now leave the hook point uncovered as best I can so that when the fish inhales the bait the point is exposed and even if the fish decides to spit it out there is a better chance the point will find its mouth on the way out.

Terminal tackle should consist of a solid hook and a heavy monofilament leader with swivel at the top. Above the leader should be a single bead and then a slider for your weight. These sliders are inexpensive and are slicker than just a slip sinker on your main line which tends to abrade your line causing premature breaks. You main line should be heavy mono or braided line. I choose mono for my leader to give some stretch at the hook and also withstand the abrasion effects of heavy brush a little better than braided line. This is another trick learned the hard way. Braided line is strong for its diameter and allows me to get much more on my reels while still using thirty to fifty pound test line. The braided lines will not hold their strength however with the slightest abrasion so check it often.

I use an octopus style hook in the 7/0 size range. I prefer to set the hook hard on these big cats so I choose the octopus over the circle as my choice in hooks. There are several hook makers out there that offer the octopus style hook. Mustad, owner and Gamakatsu are my favorite and provide excellent made hooks.

Early spring cat fishing may not be as popular as some of the other fish out there but with a little patients and trial and error lessons learned you might find a new and exciting early spring activity for yourself and family. You might even find yourself alone in your new endeavor and have all those shallow coves to yourself and enjoy some great fishing fun as well as some great fillets for the table.

Check out my website www.RamblingAngler.com for more down home fishing information.

Ken McBroom is an accomplished outdoor writer and photographer. Growing up in Lynchburg Tennessee allowed him many opportunities afield as a boy and young man. Later in life his wanderlust took him all over our great country to include the oceans, rivers and mountains of Alaska. Married now with two beautiful children Ken calls Indiana home and finds himself learning yet another region and enjoying every minute. Ken is an avid hunter and angler and hopes, as an outdoor communicator, he can share his adventures and help others pursue their outdoor dreams. Ken's adventures, writings and photos can be seen at his website Rambling Angler Outdoors.